Reinstate Your Righteousness in This Nation

O Righteous Judge,
I stand before you in the court of heaven.
I bring my petitions before you and believe they are granted because You said whatsoever
I ask in prayer, believe that I have received it and it will be mine, and You said that we
should be confident according to Your word that You hear us whenever we ask for
anything that pleases You. And if You hear us, we know we have anything we ask of You.
Today, I am asking You for righteousness to be reinstated in this nation through the 9 US
Supreme Court Justices that have been selected to be the final arbiters of the law of this
land.
I ask that the eyes of their hearts be enlightened in order that they may know the hope to
which You have called them and which You have called this nation.
John G. Roberts, Jr., 62 Bush 2005
Clarence Thomas, 68, Bush ‘91
Ruth Ginsburg, 84, Clinton ‘93
Stephen Breyer, 78, Clinton ‘94
Samuel Alito, 67, Bush 2005
Sonia Sotomayor, 62, Obama 2009
Elena Kagan, 57, Obama 2009
Neil Gorsuch, 49, Trump 2018
Trump nominee Brett Kavanaugh – Lord, please have the Senate confirm him if he is
your selection.
Please remove every justice that will not glorify You and Your will and Your decrees and
put justices on this court that will be like King Josiah.
I bring 2nd Kings Chapter 22 and 23 to Your remembrance, because Your word does not
return void. Josiah, the king, discovered Your written Word in the temple and he had his
secretary read it out loud to him, and while the king listened to the words of the book of
law, he was overcome with dread as he realized that his ancestors had sinned against You
and there was a wrathful fire coming as a result, and he tore his garments and he vowed
to reinstate all Your decrees.
Your Word says that the king tore down every idol made in every high place. He removed
the idols of Baal and Asherah from the temple of the Lord. He did away with the
idolatrous priests. He ground to powder the Asherah poles. He tore down the quarters of
the prostitutes that were in the temple of the Lord. He burned the chariots dedicated to
the sun. He pulled down the altars dedicated to foreign gods. He slaughtered the priests.
He reinstated the Passover.
Your Word says that neither before nor after Josiah was there a king like him who
turned to You like King Josiah did—with all his heart and with all his soul and with all his
strength, in accordance with all the Law of Moses. I ask in the Name of Jesus, that You
place 9 King Josiah’s on that court, and through them, remove every idolatrous thing in
this nation and reinstate Your laws and decrees. In Jesus’ name, Amen.

Testifying in defense of AmericaPrayers 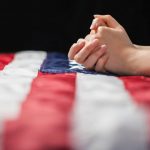