The Bride of Christ Arising Within Our Borders!

Let’s pray together!
Father, O Righteous Judge, we come before You and present our case using Your word from Colossians 2:9-15.
For Jesus is the complete fullness of deity living in human form. And our own completeness is now found in Christ.
America is completely filled with God as Christ’s fullness overflows within us. Christ is the Head of every kingdom
and authority in the universe including our great nation, the United States of America,
Through our union with Christ as we have experienced circumcision of our hearts. All of the guilt and power of sin
have been cut away and is now extinct because of what Christ, the Anointed One, has accomplished for us.
For we’ve been buried with Him into His death. Our “baptism into death” also means we were raised as a nation
with Him when we believed in God’s resurrection power, the power that raised Christ from death’s realm. This
‘realm of death’ describes our former state, for we were held in sin’s grasp as a nation. But now, the United States
of America has been resurrected out of that ‘realm of death’ never to return, for we are forever alive and forgiven of
all our sins! We, Women Of The Nation, are prophesying America’s future, not just predicting it through the
power of Your word, but causing the future of our nation to exist and come into being as we call those things that are
not as though they were concerning America.
Oh Righteous Judge, we speak directly to the bride of Christ living within our American borders to arise and stand
in the gap for the nation. Jesus Christ canceled out every legal violation we had on our record and the old arrest
warrant that stood to indict us as a nation. Jesus erased it all, our sins, our stained souls, and He deleted it all and
they cannot be retrieved! We ask You, Oh Righteous Judge, to strike it all from our record as a nation! Everything
we once were in Adam has been placed onto His cross and nailed permanently there as a public display of
cancellation. Then Jesus made a public spectacle of all the powers and principalities of darkness, stripping away from
them every weapon and their entire spiritual authority and power to accuse us. And by the power of the cross, Jesus
led them around as prisoners in a procession of triumph. Jesus was not their prisoner; all darkness, and the power of
demons and hell, was his prisoners!
Your word further states in Colossians 3:12-13 that we as a nation, The United States of America, are always and
dearly loved by God! We robe ourselves as a nation with virtues of God, since we have been divinely chosen to be
holy. We are merciful as we endeavor to understand others, and we are compassionate, showing kindness toward all.
We are gentle and humble, unoffendable in our patience with others. We tolerate the weaknesses of those in the
family of faith, forgiving one another in the same way that You, Righteous Judge, have made a precious way for
forgiveness to flow toward us through Jesus Christ our Lord and Savior. We declare and we decree that America
is forgiven and America shall be saved. We declare and we decree that we are The United States of America and
dark forces and powers that are subject to our authority through the name of Jesus Christ will not divide us. We
pray and we believe in the name of Jesus that the bride of Christ is arising within our borders and making ready for
Your soon coming return. The Spirit and the bride say, “Come! Even so, Come! Lord Jesus.”
Thank you for standing and praying with me. We are making a difference!
My love and prayers for you,
Cheryl Salem
Founder and President, Women Of The Nation
www. 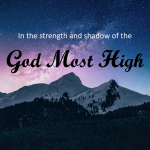 The Commander of Angel Armies will fight for us!Prayers